Fire Protection System installations in Data Centers are being challenged by computing density increases and the push for PUE improvements. High cooling loads and reducing cooling energy cost is driving data center managers to change the physical structure of their rooms. Hot Aisle and Cold Aisle (HACA) containment systems in the various flavors they come in are very efficient at improving cooling efficiency and can often have short payback timeframes. Most newly constructed data centers these days include HACA containment and many existing data centers are being retrofitted as well. It is obvious that the HACA strategy is here to stay and for good reason. 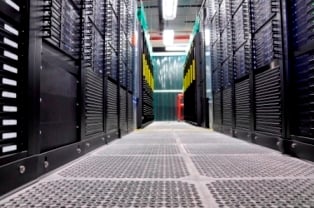 HACA containment systems affect fire suppression and fire detection in many ways. They can make fires more difficult to detect and the obstructions they create can make them more difficult to control or extinguish. Those who have employed HACA strategies in their data center but have not made adjustments to the fire protection of the room will most likely have a problem and it may be bigger than they think.

This is the first of a two part series of blog posts describing how HACA systems affect conventional approaches to fire protection in the data center environment and considerations to make when designing a room with HACA systems. The truth is the fire protection community has not kept up with the pace of change in technology rooms. Often code development follows behind changes in technology. However, the good news is that experts within the fire protection industry are taking aim at this challenge today in order to develop guidance for the changing data center.

There are two common misconceptions that lead some data center operators to ignore the impact of HACA containment on fire protection. The first misconception is that fires don’t happen in data centers, but the truth is they do. Businesses are often silent about fires in their IT facilities, in hopes of maintaining a positive image. Additionally many fires that do occur in these buildings are successfully controlled or extinguished by fixed fire suppression systems and are thus hardly newsworthy. These facts make it very difficult to monitor fire activity in data centers; yet we know they occur. Fire protection service organizations respond several times a year to re-arm suppression systems that discharged because of a fire. In the interest of client confidentiality these service providers do not share information about fires.

The second misconception is that the HACA containment system has features to address every possible fire protection issue. Manufacturers of containment systems are aware of the potential impact on fire protection and have often made assurances that their system will work with existing fire systems. Some of these claims are misleading and are result of an oversimplified understanding of how fire detection and suppression systems operate, rather than being based on solid fire science, experience and testing.

Containment Systems as New Barriers in the Data Center

When you start to break down the concepts employed by the various types of containment systems they are essentially barriers or new partitions within the space. These barriers serve to direct the cooling airflow to where it is needed most at the face of the computer server.

Many people assume that if a barrier added as part of a containment system is transparent, it will not affect the fire protection in the room. However, these barriers create three conditions that change the approach needed for fire protection in a medium to high density data center:

When thought of as barriers, the need for a professional analysis of the room’s fire detection and suppression system becomes well warranted.

In the second of this series of blog posts, I will discuss the challenges these containment barriers present to fire suppression and detection systems. I will also share about some of the progress being made by the fire protection industry to address the changing data center. To learn more on this important topic, download my article that appeared in the 7×24 Exchange Fall 2011 Magazine.