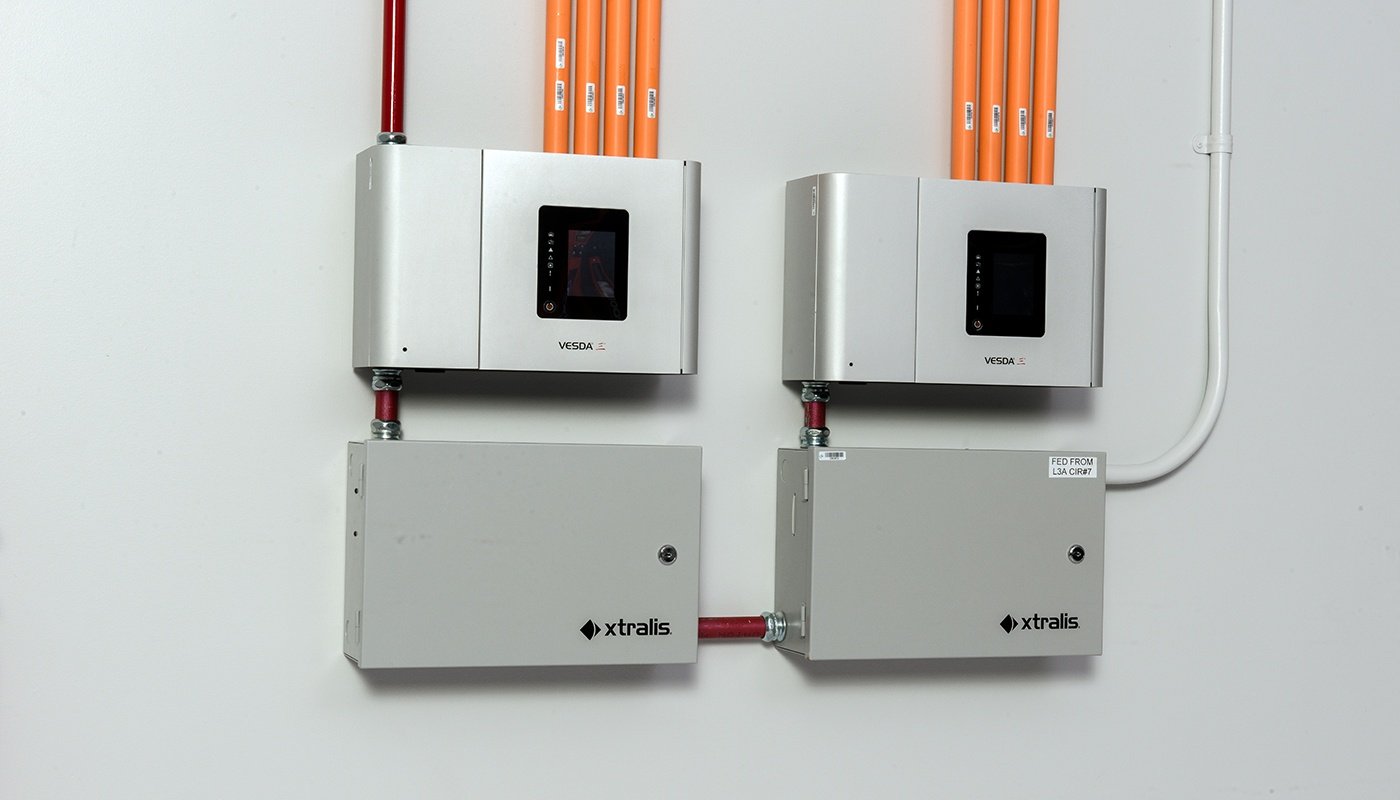 An Air Sampling Detector consists of a piping or tubing distribution network that runs from the detector to the area(s) to be protected. An aspiration fan in the detector housing draws air from the protected area back to the detector through air sampling ports, piping, or tubing. At the detector, the air is analyzed for fire products. Air Sampling Smoke Detectors are capable of detecting a fire at its earliest stage. Traditional "spot-type" detectors passively detect smoke or heat in their immediate area. Air Sampling Smoke Detectors actively pulls room air through a piping network to its detection chamber where it can detect the presence of particles that are created in the very early stages of combustion, even before smoke is visible.

A fan continually drawing air into a pipe network attached to a detector unit, and passes the air through a dual stage filter to remove dirt and particles larger than 25 microns, sending the clean air to a laser detection chamber for smoke detection.

The detector measures the light scatter caused by any smoke and processes the detector signal and presents the smoke level graphically.

A fan continuously draws air from the protected area through the detection chamber. Once inside, particles pass through the laser beam while the photo collector measures reflected light from the particles. The collector counts the number of discrete particles to determine the level of smoke concentration. A particle size discriminator prevents large particles, such as dust, from contributing to the smoke concentration.

Unlike other high-sensitivity smoke detection system, particle counting doesn’t use filters. Instead, it relies on the same advanced particle counting techniques used in sophisticated labs and clean room facilities where particle concentration is absolutely critical. Because they detect both the number and size of particles, it can actually distinguish particles of combustion from dust and other airborne contaminants that routinely trigger nuisance alarms in traditional spot detectors.

The principle behind Cloud Chambers is to humidify a sample of air and expose it to a rapid expansion. A barometric phenomenon then occurs where the particulate matter in the sample act as seeds to form microscopic water droplets around each particulate. This process amplifies the size of the particulate from something that was below the wavelength of light (invisible) to a size far above the wavelength of light, making it easily to detect and quantify. By controlling the amount of pressure in the sample, the cloud chamber controls the size of the condensate, which is done at a level far below the size of dust, dirt and other contaminants. In its time, Cloud Chamber Systems were very good, but there is no question that laser base technologies offer some significant advantages.