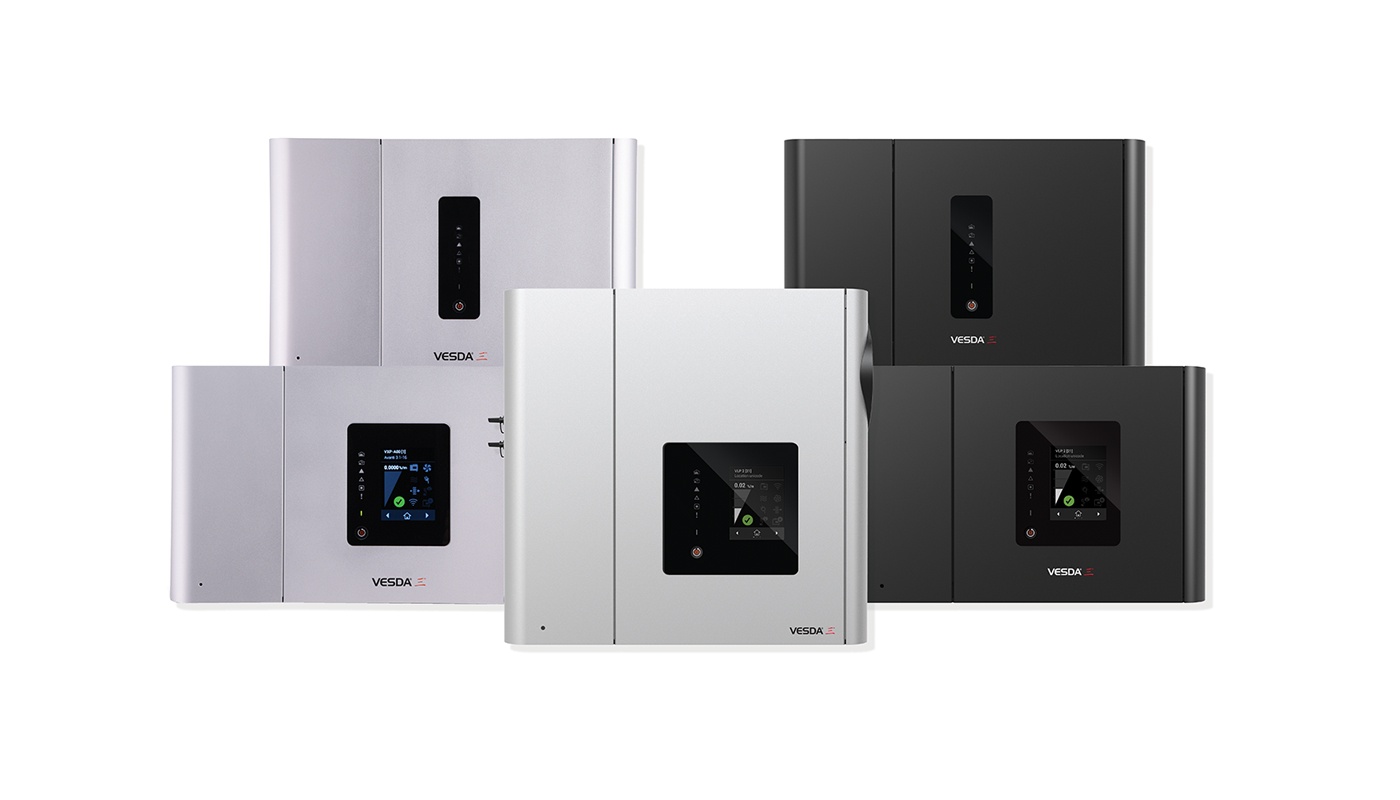 VESDA solutions provide the earliest possible warning of an impending fire hazard, buying time to investigate an alarm and initiate an appropriate response to prevent injury, property damage or business disruption. Because VESDA has the industry’s widest sensitivity range and multi-level warnings, even minute levels of smoke can be detected before a fire has time to escalate.

VESDA works by continually drawing air into the pipe network via a high efficiency aspirator. A sample of this air is then passed through a dual stage filter. The first stage removes dust and dirt from the air sample before it allows the sample to enter the laser detection chamber for smoke detection. The second (ultra fine) stage provides an additional clean air supply to keep the detector’s optical surfaces free from contamination, ensuring stable calibration and long detector life. From the filter, the air sample is passed through to the calibrated detection chamber where it is exposed to a laser light source. When smoke is present, light is scattered within the detection chamber and is instantly identified by the highly sensitive receiver system. The signal is then processed and presented via a bar graph display, alarm threshold indicators and/or graphic display. The VESDA detectors are able to communicate this information to a fire alarm control panel, a software management system or a building management system via relays or a High Level Interface (HLI).

VESDA systems also has its own communications loop called VEDSAnet. VESDAnet is a comprehensive fault tolerant “closed” 2-wire communications loop. It links the detectors, displays, programmers and remote units on a daisy chained loop. VESDAnet allows for a number of units to be programmed together from one or more locations and automatically detects communication failures. It also allows for easy interfacing with systems external to the network, such as intelligent fire alarm panels and building management systems.

This diagram shows the progression of fire growth over time. Note that the incipient stage of a fire provides the widest window of opportunity to detect and control the spread of fire. VESDA can be configured to generate multiple alarms within the incipient stage. VESDA can also be configured to generate an additional alarm (Fire 2) in the advanced stages of a fire. This feature is unique to VESDA and takes advantage of its very wide sensitivity range; thus allowing one detector to monitor the entire progression of fire growth.

The VESDA VLC is an aspirating smoke detector that provides very early warning in single and small environments where space is at a premium. The VESDA VLC aspirating smoke detector is available in two versions, one that interfaces via relays only (RO) and one that interfaces via relays and VESDAnet (VN). Model Numbers: VLC-500, VLC-505

The VESDA VLP is the flagship of the VESDA aspirating smoke detector product line. Using unique detection principles, the VLP has an alarm sensitivity range of 0.005%–20% obscuration/m (0.0015%–6.25% obscuration/ft). The detector can form part of a modular system with the display, programmer and VESDAnet modules installed in a remote location or as a "self-contained" system by replacing the detector's panels with display and/or programmer modules. With the display and programmer remote, the user interfaces for many Xtralis VESDA VLP detectors can be grouped together in a cabinet for easy programming.

The VESDA VLS by Xtralis is similar to the flagship VESDA VLP aspirating smoke detector but also includes a valve mechanism in the inlet manifold and software to control the airflow from the four sectors (pipes). This configuration enables a single VESDA zone to be divided into four separate sectors, for example, distinguishing between separate voids within a room. The VLS locates the origin of smoke by identifying the first sector (pipe) with the highest level of smoke and then continues to sample from all sectors to monitor fire growth. The VLS provides four alarm levels for each individual pipe (Alert, Action, Fire 1 and Fire 2). Sector factors (sensitivity) can be set individually to ensure the optimal alarm thresholds are applied for each sector. An extra LED indicates when the first alarm sector has been established. Model Numbers: VLS-XXX

The VESDA Ex d is aspirating smoke detector has been designed to provide very early fire detection within hazardous areas that may contain flammable gases. The VESDA Ex d satisfies the need of those end users who implement risk-based, fire-engineering practices and recognize the value of their critical assets. Model Numbers: VLX-100

The VESDA VFT-15 is a unique and versatile high-sensitivity aspirating smoke detector able to pinpoint the source of incipient smoke to speed response, enhance investigation and minimize business disruption and downtime where location is critical and a visual search is impossible to perform quickly. VESDA VFT is the only aspirating smoke detector on today’s market to provide identification of up to 15 protected areas. Model Numbers: VFT-15, VFT-15-C