Mass Notification is a comprehensive solution that leverages cutting-edge communications technology to not only warn people of danger, but to keep them informed and guide them to safety.

Mass Notification (also known as MNS) is a system of inputs, monitoring capabilities, and outputs, designed to detect threat, track events, and provide instructions to people in the presence of danger.

The area served by an MNS may be a single building, a campus, a military installation, an industrial facility, or even an entire municipality. Threats detected and managed by Mass Notification Systems range from terrorist activity and workplace violence, to environmental incidents like chemical spills, and natural disasters such as storms and earthquakes.

Mass Notification installations are wide-ranging fully-integrated mega-systems that encompass common building functions such as fire alarm, security, access control, and video surveillance. MNS brings inputs from many different sources under a single event management umbrella so as to implement a response in a manner best suited to the conditions. For example, while it may be appropriate to evacuate an area where a fire has been detected, this response could have disastrous consequences during an incident involving firearms. Despite this, the fire alarm is frequently the first system activated regardless of the event. 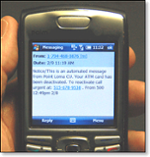 Mass Notification systems overcome this one-dimensional approach by superseding all others. They are intended to provide the big picture with regard to facility safety by monitoring for, managing, and warning of multiple threats. Instructions may be broadcast by traditional means including speakers and flashing strobes, but relatively new forms of communications are being employed with increasing regularity among Mass Notification installations. These forms of communication include email blasts, text messaging, voice messaging, computer pop-ups, and electronic bulletin boards.