This article was previously published on Fire & Safety Magazine in Spring 2016. 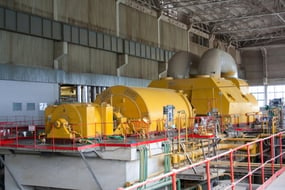 Steam turbine generators are widely used throughout the world as a common source of energy production for public utilities and industry. Fires in turbines are not frequent, but when they occur they can be dangerous for responders to handle, difficult for power plant operators to manage, and costly for the utility and the public they serve.

Water mist systems have the firefighting attributes necessary to make managing a turbine fire less complex. This article introduces the concept of turbine fire protection using high pressure water mist and how these systems can integrate with a power plant’s operation. Case studies featuring a recent large fire, research into turbine fires, and an installed water mist solution are presented.

What Do Turbines Do and How Can They Catch Fire?

A steam turbine utilizes superheated steam to spin a shaft. The energy imparted to the shaft can be used for various work outputs like running large compressors and pumps. The most common use is electric power generation—creating electricity by attaching a generator to the end of the turbine shaft.

Steam turbines range in size from 5 kilowatts to over 1500 megawatts. These are massive, heavy machines spinning at 3,600 RPM for 60 Hz power production and 3,000 RPM for 50 Hz. There are a number of subsystems supporting turbine operation, but the lubrication (lube) oil system is the primary fire concern.

Lube oils are Class IIIB combustible liquids with flash points ranging from 375°F to 500°F. The flash point of lube oil is high enough that in many applications it would not be easy to ignite. But because of how it is used for steam turbines, the fires that do occur are very challenging and difficult to put out. As a result, responses to turbine fires are usually slow and measured in order to keep responding personnel safe.

Lube oil is used to lubricate bearings along the turbine shaft. Pumped through steel pipes from a tank and pump skid in a recirculating system, lube oil systems contain hundreds of gallons of oil. If, for any reason, lube oil flow is interrupted, the spinning shaft will make metal-to-metal contact with the inner bearing surfaces. Bearing failure can result in catastrophic damage to the turbine, so the flow of lube oil must be available to the turbine shaft any time it is spinning, even if it is on fire.

If a pipe breaks, a seal fails, or another leak develops, the pressurized oil can soak the surrounding insulation and cause a smoldering fire or sometimes even spray onto a hot surface, igniting and causing a liquid spray fire. Oil leaks will cause pool fires by collecting on flat surfaces, or cause vertical surface fires by flowing down structures supporting the turbine.

Not all fires occur at the turbine—fires can also originate at the lube oil skid. Lube oil skids include the tank holding oil, multiple pumps with seals, oil filters, and an oil cooler. Many turbines have secondary oil systems used to operate control valves on the turbine which have the same fire concerns. The components of the skid present possible points of failure where lube oil fires have been documented.

Looking to learn more about how to choose the right partner for your Power Generation fire protection?

Water mist systems are used in power generation applications for combustion turbines and diesel generators. These pieces of equipment experience similar fires to steam turbines. Water mist designs for combustion turbines and generators are typically total flooding systems suited to the size of those pieces of equipment. Steam turbines present a different challenge; they are installed in large rooms with high ceilings, commonly exceeding the listings of most total flood water mist systems. For steam turbines, local application water mist designs are the only choice.

Three firefighting mechanisms of water mist have been documented: ultra-rapid evaporative cooling, local oxygen displacement, and radiant heat blocking of the flames to unburnt fuels. Manufacturers of water mist systems have performed many fire tests and are acutely aware of the abilities of specific systems to extinguish difficult fires. Snuffing pool, spray, and vertical surface fires of flammable and combustible liquids are what water mist systems are known for.

Since the year 2000, there have been several large power plant fires involving lube oil resulting in extensive power outages, reduced generating capacity, significant property damages, and millions of dollars (US) in lost revenues.

On May 5, 2014, the Martin Drake Power Plant in Colorado Springs, Colorado experienced a fire due to an uncontrolled spray of lube oil caused by human error.1 A mechanic was performing the common task of changing an oil filter, but this time failed to recognize the filter was still under pressure. The loosened filter allowed oil to spray onto nearby steam pipes and ignite. The resulting fire “…injured one person and necessitated a voluntary evacuation zone for five blocks around the plant.”2

22,000 customers experienced a power outage as two-thirds of the Colorado Springs Fire Department responded to the fire. An after-action report by the utility reported the plant closed for nine weeks and it took ten months to regain full operation.3

The Drake fire demonstrated the worst results of a turbine fire, but it is a well-documented example of how lubrication oil can be the nexus to a large fire. The financial costs were not only borne by the utility, but by its customers—a costly reminder that effective, fixed fire protection systems must be integrated into safe power plant designs.

In 2004, to study the severity of steam turbine fires, FM Global performed large-scale turbine fire tests in their large-burn laboratory in West Gloucester, Rhode Island. The tests revealed lube-oil-fed fires can be catastrophic if not protected.

The FM Global test results also indicate the lubrication oil flow should be shut off as soon as possible; balancing the shutdown against the operating needs of the turbine. Inadequate fire protection, untrained operators, and a lack of proper emergency response protocols dramatically worsen the severity of these fires.

A Successful Water Mist Installation on a Steam Turbine

Recently in Florida, an industrial plant generating its own power installed a high-pressure water mist system for a 35 megawatt steam turbine generator. The plant had previous experience with water mist for other hazards. General specifications for the system were for fire extinguishment, allowing maintenance access to the turbine, integration with the operational plan, and use of video cameras to monitor the turbine room.

Though this was a medium sized turbine, the room was larger than any of the total flooding water mist listings available from manufacturers. To overcome the room challenges, a Marioff HI-FOG local application water mist system was selected to protect the turbine bearings and lube oil skid. The system was configured according to MSC/Circ.913, Guidelines for the Approval of Fixed Water-based Local Application Fire-fighting Systems for use in Category A Machinery Spaces, and fire tests conducted at VTT described in Test Report No. RTE11160/99, Evaluating the Extinguishing Capabilities of the HI-FOG Local Application Fire Protection System in Machinery Spaces According to IMO MSC/Circ.913 VTT Building Technology, June 1999.

The installation included two zones of water mist protection. One zone was to protect a fire that may occur on one of the three exposed bearings along the turbine shaft. Nozzles were placed above the turbine bearings, but were installed in such a way that an overhead crane could still be used for maintenance. Two nozzles were placed over the top of each bearing, spraying cones of water mist from the sides towards the bearings—a total of six nozzles.

The second zone was above the lube oil skid, the control oil skid, and the diked area surrounding the two. The dike was an important fire protection feature. It included a sloped floor and drain to take oil away to a safe location and set a boundary for the size of a pool fire, guiding placement of water mist nozzles above the skids. Six nozzles were provided for the second zone above the oil skids.

The system was configured to discharge one zone at a time, as a fire in both areas simultaneously was not likely. The turbine manufacturer listed the expected wind-down time of the turbine to be 40 minutes, leading to a decision of 60 minutes of protection from the water mist system. Installation of the water mist system followed the design, installation, and maintenance manual for Marioff HI-Fog Systems (GPU) for Local Application Fire Fighting in Machinery Spaces.

The water mist system was driven by a Marioff HI-FOG GPU (Gas-driven Pump Unit). The GPU uses pressure from compressed nitrogen cylinders to drive a mechanical, piston-type water pump. The water supply was piped from the facility’s existing fire water system and was sized for a system demand of 25 gallons per minute. Stainless steel tubing was routed from the GPU to the two water mist zones.

Often times there is an expectation of automatic activation of a system like this. However, the plant chose manual-only operation so the turbine operator could be in complete control of shutting down turbine operation before manually discharging water mist. Fire conditions in the room are monitored by four video image smoke detection (VISD) cameras which can detect both smoke and flames. The VISD cameras feed video images to a monitor in the turbine control room where the feed can be observed at all times. If a fire occurs, the operator will be notified of the fire at the video display so he or she can execute the fire emergency plan and discharge the system. Additional manual releases are located within the turbine room to be used by qualified personnel.

This system was installed and commissioned in January of 2014 by ORR Protection Systems’ Tampa, Florida office.

There are limited installations of high pressure water mist systems for steam turbine generators in the United States, but no shortage of fires. There is clearly a need for a high-performance fire protection solution that artfully integrates into the operations of the power plants. Fire protection engineers should be careful to study lubrication oil systems and consult with power plant designers to identify likely points of failure. Water-based protection should be provided in all areas where a fire could occur including the consideration of a high pressure water mist system.