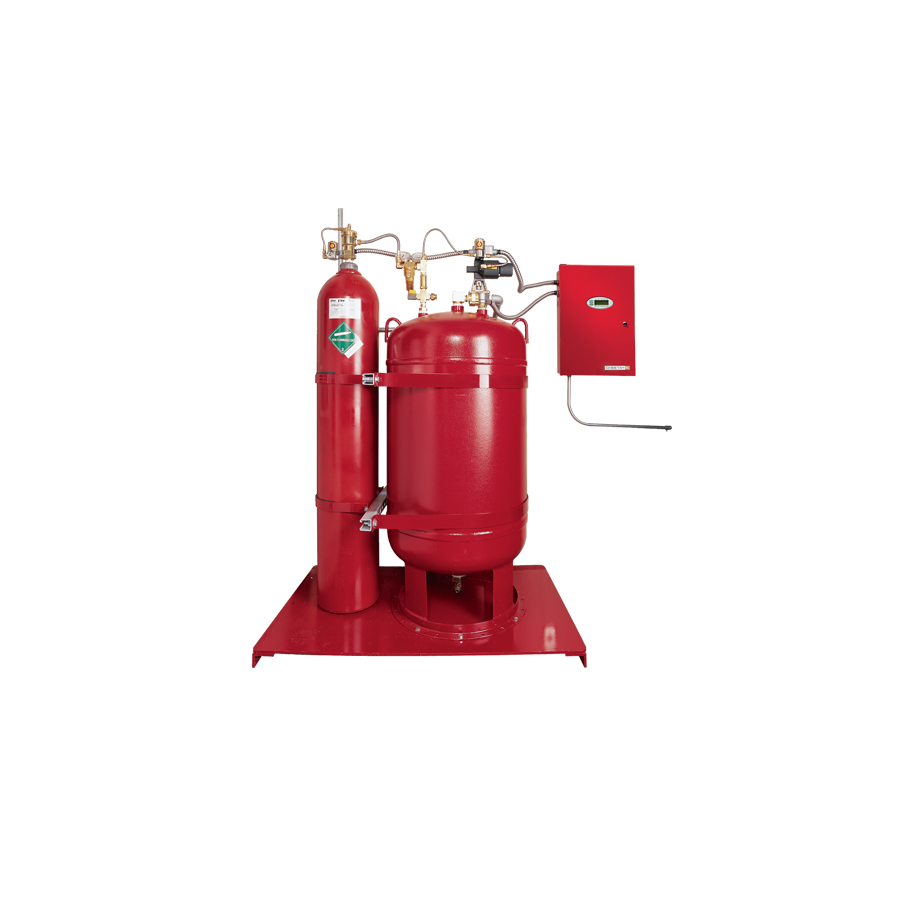 Water is an outstanding fire suppression agent due to its high heat capacity and latent heat of vaporization. The Fike Micromist system nozzle uses a plate to slice the small jets of water that flow through the nozzle orifice. The resulting water mist contains a variety of droplet sizes. The larger droplets produced by the nozzle provide the necessary energy and momentum to carry the smaller droplets to the base of the fire where the mist vaporizes and extinguishes the fire. The simple theory behind this development is that a large amount of small droplets have a greater surface area than the same volume of large droplets, therefore absorb more heat.

When a fire condition is detected in a given protected hazard, the Fike control panel sends a signal to the releasing module to operate the Micromist suppression system. The water storage container is not under pressure until the system is actuated. The water container utilizes a 3/4” (20mm) brass valve to control the flow of water to the system nozzles. The water container has a drain/fill valve and a vent valve to drain the water when necessary. A safety disc is also fitted on the water container which ruptures if the pressure inside reaches a pressure greater than 500 psi (34 bar).

The Micromist system contains nitrogen cylinder(s) and a water cylinder. The nitrogen storage cylinder provides pressure to drive the water to the system nozzles. When the system is operated, valves on the nitrogen tanks open and the resulting air pressure flows through a pressure regulating valve (PRV) which regulates the pressure to 320 psi (22 Bar). This pressure drives the water through the opened water valve and to the system nozzles. The Micromist system uses relatively short pulses of water, called cycling, to aid in the extinguishment of fires as well as minimize the property damage associated with a continuous discharge.

The Micromist suppression system comes pre-packaged on a skid produced from 3/8” (9.5mm) thick steel plate. The water cylinder is bolted to the skid and the nitrogen cylinder(s) are mounted to the water cylinder with straps. The skid is designed so it can be easily transported with a fork lift.

The Fike Micromist system package is offered in 70 and 112 gallon (267 and 423 liter) configurations. The 70 gallon system consists primarily of one nitrogen cylinder and a water storage container. The 112 gallon system has two nitrogen cylinders and one water storage container. The nitrogen cylinders are charged to 1850 psi (128 bar) and fitted with a forged brass valve that is actuated with a solenoid valve. The solenoid valve is fitted with a pressure gauge (or optional switch) so the pressure inside the cylinder can be monitored.

The piping requirements for the Micromist system offer the flexibility of copper tubing type K or L, stainless steel tubing or pipe as specified in NFPA 750. Due to the low flow requirements of the Micromist nozzle it is not mandatory that the piping be balanced, which improves system flexibility. Consult the Micromist Design, Installation, and Maintenance Manual (P/N 06-153) for detailed piping limitations.

The Micromist system nozzles are constructed of brass and contain a nozzle screen to trap any debris that might be in the system piping. The nozzle utilizes a 1/2” (15mm) NPT port to connect to the piping network.

Micromist systems are designed and have been tested for use in protecting flammable liquid (Class B) processes and incidental combustible (Class A) materials.

flammable liquid pool fires as well as spray fires which could ignite from a ruptured hose or pipe in a process using flammable liquids. Micromist applications include, but are not limited to, the following: